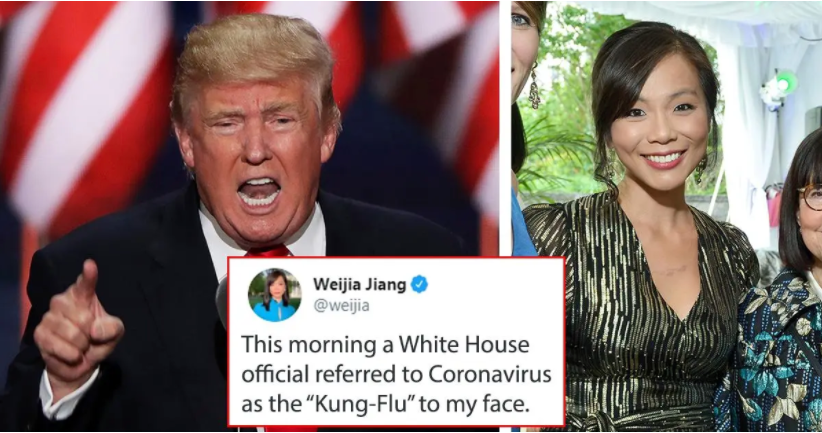 UPDATE: Free Webinar on Friday, April 3 at 12pm hosted by Act to Change

The rise in discrimination against Asian Americans amidst the COVID19 crisis is unacceptable. Join Act To Change for a conversation about how to combat this discrimination, led by Chair Maulik Pancholy, along with guests Congresswoman Grace Meng, 19th Surgeon General of the United States Dr. Vivek Murthy and actor Hudson Yang from Fresh off the Boat.

Trump tweeted about the Coronavirus being the ¨Chinese virus¨ which drew criticism on March 16, 2020.

As he talked about ways to decrease the chance of getting the virus such as social distancing, he then included an unnecessary racist comment.  NBC News states, “The United States will be powerfully supporting those industries, like Airlines and others, that are particularly affected by the Chinese Virus. We will be stronger than ever before,¨ Trump tweeted. This sparked  the Centers for Disease Control and Prevention (CDC) to state it as wrong and can harm China since it was about them. This spreads false accusations and spreads it to the wrong people.

This is not surprising to see since the racist remarks have been said from him to other countries. Trump would call Mexicans as ¨rapists¨  and ¨drug dealers¨ and call Haiti and African Nations as ¨s*hole countries.¨ Trump said it in the worst time possible and shouldn’t be said at all.

“Please stop your unnecessary rhetoric. COVID-19 is now an American virus, an Italian virus, a Spanish virus. We are all impacted & we all need to work together,¨ Ted lieu said, a US representative.

It’s only better when people realize that it’s not a ¨Chinese virus¨ but a virus that affects all countries not one. Many political Asian-American leaders and organizations  argued back against the racism of Trump.

“There has been a torrent of hurtful and racist remarks and actions targeted at Americans of Asian descent amid the Coronavirus outbreak. AAJA denounces racism and xenophobia, and stands by our community and our members, including our very own,” the Asian American Journalists Association tweeted in reply to Weijia Jiang’s tweet about the racism she encounters a White House member calling the Coronavirus, the “Kung-flu” to her face.

Many Asian-Americans are now standing up to racism and are also being helped by celebrities and political figures from Governor Phil Murphy, Elizabeth Warren, Bernie Sanders, and Joey King.