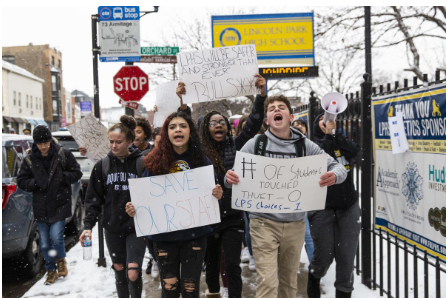 On Feb. 6, Chicago’s Lincoln Park high school students protested for one day outside of their building in regards to the five different investigations which include claims of sexual disorderly conduct, unacceptable student discipline,the basketball team being removed for the season, and the removal of the principal and assistant principal.

Tensions increased when a video showed the principal grabbing a student’s face about an ID, causing the students to protest. It’s not the first time something chaotic like that happened. Students and parents couldn’t handle the situation anymore, so students conducted sit-ins and walkouts to express their anger.

Recently, the father of a female student who was sexually assaulted by an athlete filed a lawsuit against the Chicago Public high school (CPS), saying that the district didn’t protect the female from being sexually assaulted in LPHS.

Niles North sophomore Marinel Delemios did not like the problem in Lincoln Park high school.

“I think it’s wrong for the athlete to not get charged for assaulting the girl because it’s not right for the perpetrator to not get any more of punishment,” Delemios said. “I feel that without any form of punishment, the victim won’t have any justice.”

According to ABC News, on Feb 13, the local school council is planning to meet Thursday night.