North Star News asks you: Is Pelosi justified in her actions? 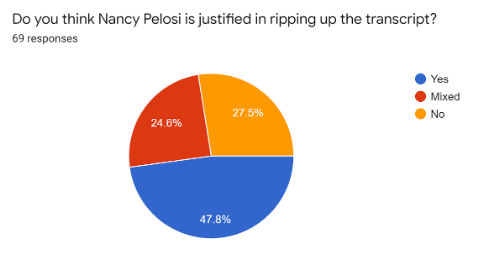 On Feb. 4, after President Donald Trump’s State of the Union address, Speaker of the House Nancy Pelosi ripped up the transcript of his speech. North Star News wants to know the Niles North community’s opinion on the act. Do you think Nancy Pelosi is justified in ripping up the transcript? Here is what some readers had to say:

Yes – “This president has been violating norms and precedents established over years for presidential behavior and he has demeaned the integrity of the office. I also believe he is guilty of the crimes noted in the impeachment articles. The SOTU address was full of exaggerations and lies. I felt she was justified in publicly expressing her feelings about the president’s disregard for the office and for the truth. This president has created a new normal and the Speaker acted according to the new reality.”

No – “While I completely understand her anger directed toward President Trump, as a functioning mature adult in her position, she should know better than to cause even more strife through this action. However, it did provide some comedy to a depressing political state.”

Yes – “She’s entitled to express herself. The message I received was that she didn’t agree with the speech.”

No – “It was an incredibly childish response for a representative of our country to do so. That being said it could be justified by the childish manner Trump refused to even shake her hand. Was it the greatest thing for her to do? No, but neither was the president publicly dismissing her in front of the entire country.”

Yes – “It was a political move. He rejected her handshake and she reciprocated the same behavior back to him. After all she has clarified about not hating the president I think she was justified in tearing it. She didn’t curse or swear or lash out. She was quiet during his speech and after she did what she thought needed to happen.”

No – “It was a pointless and disrespectful act done with bad intent. Just because one doesn’t agree with another’s opinion does not justify a public display of disrespect towards them. This display is something you would expect from an upset child, not a public political figure.”

Yes – “It was absolutely a nice way of stating that she did not agree with the lies he told during his speech.”

No – “Pelosi made the immature, impulsive decision to rip up Trump’s speech which represented the stories of hard-working Americans; ripping up the speech is disregarding undermining their amazing journey and success. Additionally, her attempt to stay humble and how “impeachment is the last resort for Trump” statement she has made earlier is ridiculous. Despite her personal opinions on Trump, she needs to learn basic respect for the leader of our country, no matter his party affiliation. Ultimately, her efforts to remove Trump for office have failed right before her eyes, the truth hurts.”