Column: Women in mass media-or are they? 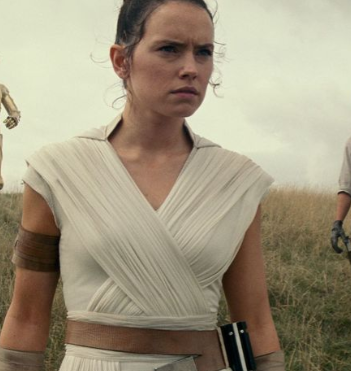 Photo credit to Disney and Lucasfilm

Rey is a prime example of an overpowered female character that caters to the female audience with no real character growth.

What do Ocean’s 8, Ghostbusters (2016), and Charlie’s Angels (2019) have in common? Their main form of marketing is that they have ‘strong’ and ‘empowering’ women. Unfortunately, in some films, women are tokenized and given the hand-me-downs of already existing properties instead of getting their own, and in most cases the fact they are a woman is heavily marketed and creates a double standard for women in media.

An example of the main focus of a movie being that they have women is Charlie’s Angels (2019). The films marketing put down our throats that these are independent women. The movie was directed by Elizabeth Banks, who is mostly known for her acting work, plays Charlie, who in the original series and original movies was played by a man. From Herald Sun Newspaper, Banks said, “Look, people have to buy tickets to this movie, too. This movie has to make money. If this movie doesn’t make money it reinforces a stereotype in Hollywood that men don’t go see women do action movies.”

The movie flopped. It had a budget of around $45 million dollars and it only made $56 million in the box office only getting a margin of profit from the movie. By marketing like they did, they alienated the male audience and made them not want to go see the movie and I don’t blame them.

Oceans 8 and Ghostbusters (2016) are possibly the cruelest of this trend. These movies are based on the already existing properties of Ocean’s 11 and Ghostbusters (1984), they rebooted the properties except now they are all women! It is a rebooting process in which instead of making original movies with an all female cast, they give them the leftovers from already existing movie properties.

An example of double standard in games is also in Mortal Kombat 11. In the game series’ history, the females were considered overly sexualized to cater to the male gaze, but it was the same for the male characters too. With the release of Mortal Kombat 11 in 2019, they dialed down on the design of the female characters with most of their customization options having little to no skin showing, while the male characters have shirtless options and show off their appearance and physique. This is another attempt by game developers to appear ‘woke’ and ‘feminist’, when really they are not. Feminism’s definition is that every gender is treated equally. Females should be able to show off their sexuality without being called names or told that they are not progressive for wearing something that shows some skin.

Tokenizing women in film is not new either, or making a female character more powerful than everyone else to make a statement saying ‘look at this strong female’. With studios seeing the potential of bringing in the feminist audience, they forget that they should still focus on making original and good characters.In movies like the recent Star Wars movies they have women main characters, but they don’t really go through a true character arc.

Let’s use Rey from Star Wars: the Force Awakens and Star Wars: the Last Jedi. In movies, Rey, played by Daisy Ridley, is the main character. But, unlike her predecessors, Luke and Anakin Skywalker, she doesn’t seem to learn and develop. This character is intentional. Instead of making a grounded, relatable character like Luke Skywalker, they made one to cater to the female audience.  Luke and Anakin in their first movies weren’t able to use the Force since they were just presented to it, but Rey, who never used the Force before, was able to use the Force and win a lightsaber duel with a Sith who had been training for years. Luke and Anakin learned how to control the Force, and we got to see their struggle. Rey literally gets close to zero training in the second movie, and everyone in the movie loves her.. Hopefully, in the next Star Wars movie, the Rise of the Skywalker, we will have the chance to see Rey actually develop as a character.

I hope for the future of cinema, that diversity is not used as a tool to make a quick buck.