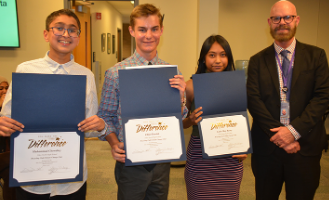 Sophomore Recycling Club President Muhammad Chowdhry was honored along with other students on October 15 at D219’s board meeting for making an environmental difference. Chowdhry described his participation in his club, “I have done 28 hours of community service, and I have gone 50+ times.”

According to Dr. James Edwards, “(Chowdhry) came to Recycling Club last year more than anyone in many, many years.”

Recycling Club sponsor and Mathematics instructor Arlene Sagan said, “He was always willing to go the extra mile to make sure all paper in his area made it outside to the recycling bins-even if it meant making three trips.  No one else has done that!”

In his speech at the meeting, he points out the benefits of his club, “By adopting a recycling program, a school not only removes materials from the waste stream, but can also reduce disposal costs, save valuable landfill space, conserve natural resources, provide students educational opportunities, and empower students with the knowledge that their actions can make a difference!”

He also plans to continue to help the environment in his future. “I look forward to going to a four year university, and to major in computer science. With that degree I look forward to changing the climate.”

Come to Recycling Club any Tuesday in room 1400 after school for community service hours.